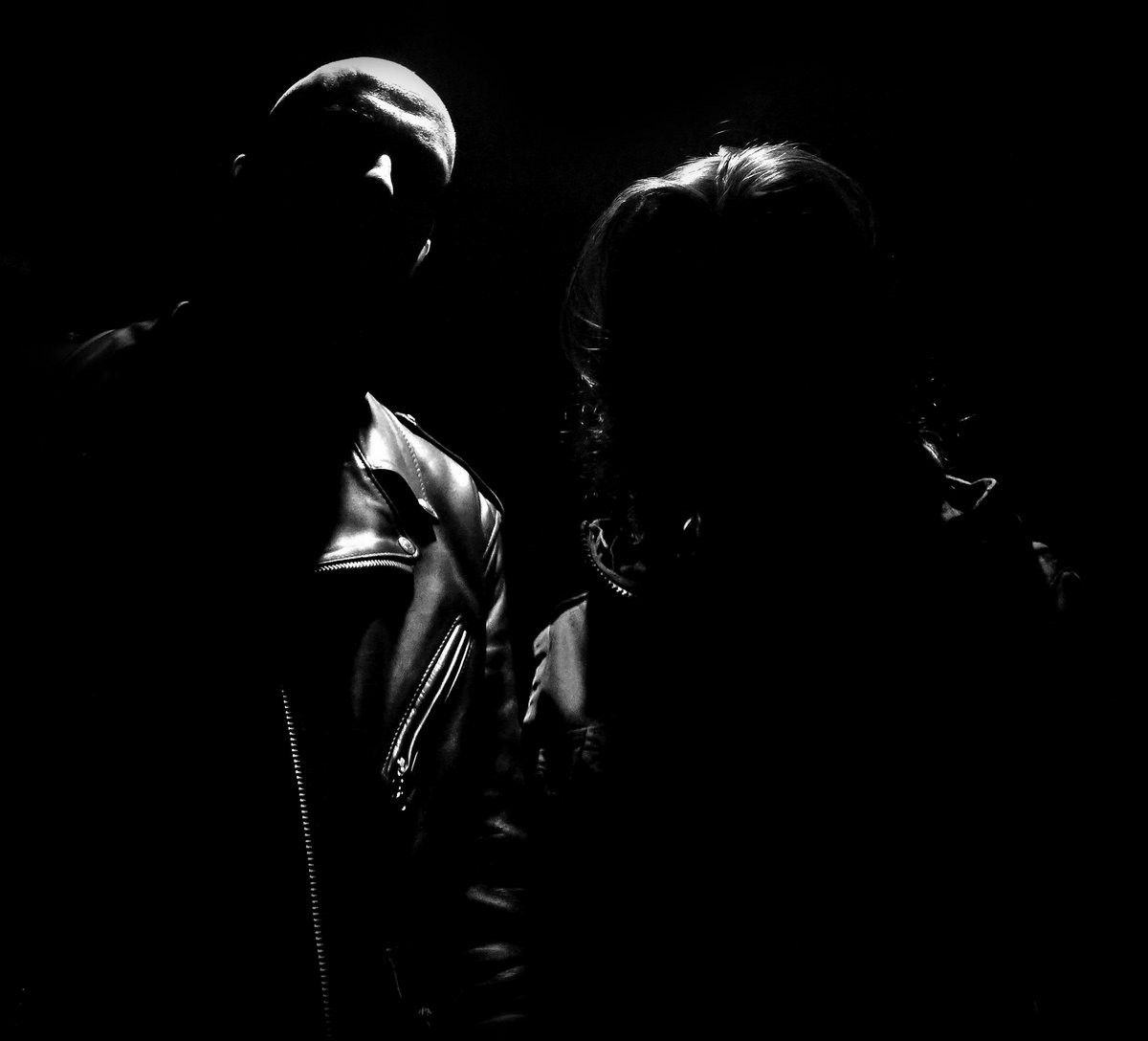 Legion Of Andromeda’s debut LP, ‘Iron Scorn’, is the most singularly revolting thing I’ve heard in quite some time. For all the horror and disgust, though, it’s also strangely compelling: like watching one slug eat another slug. It’s gruelling, intense and certainly not for the faint of heart – listen to it here while you read these words, all of which were provided by vocalist -R-.

Please tell us a bit about how Legion Of Andromeda got started – how did you meet and what was your original ambition?

Our wives, former work colleagues, decided to introduce us. One day by chance they were talking about the deranged behavior of their respective husbands, discovering that we were both listened to disgusting music every day, wasting family money on records and obscure gear and generally endorsing paranoia, hatred and misanthropy. We became friends and after many deafening listening sessions, show attendances and much alcohol abuse -M- asked to do something together and I accepted.

Our original ambition? Create something different.

How would you say the band has changed, developed or moved on between the demo and the new LP?

Our sound is the aspect that has developed most. Recording with Steve Albini (a massive achievement for us) benefited the sound enormously, adding a presence and an overall impact we always wanted to have. The huge wall of sound he was able to obtain has no equal and we couldn’t have asked for more.

On the songwriting side, sharpening the approach, achieving focus, embracing refinements are the real developments. We’re totally uninterested in adding different instrumentation, sound layers, fancy arrangements and shit like that. Involution is the key, we don’t want to progress, to get more ‘arty’ or elegant just to accomplish current trends. We don’t want to ruin our noise with clean post metal arpeggios and scum like that. Primitivism is liberation.

The album is an incredibly intense and gruelling experience. Please tell us how you arrived at this sound and what you are trying to achieve.

Reaching altered states of consciousness through compulsive repetition is the maximum achievement. Self-disintegration generating a massive amount of destructive energy is the way we arrive at that.

I find the record weird, because while there doesn’t seem to be much variation it’s still gruesomely compelling. What do you think it is about this music that can hold peoples’ attention? How do you differentiate/distinguish between hypnotic repetition and boredom?

Being constantly forged in tension, LOA’s sound is torturous and the principle of torture is sadistic repetition. While horrible, torture is anything but tedious. Even if it may seem that LOA’s sound is just the same over and over, I must say that the riffs are never identical and songs follow a precise structure even with changes and subtle dynamics. Nothing is left to chance and we’ll never release a song if we’re not 100% satisfied with the results as we’re extremely exigent and everything must be perfect. It’s a minimalist approach and we find it way more fascinating and creative, even more difficult and challenging to accomplish, than, say, progressive music. Minimalism is extremely deep, as it lets you explore a single theme in all its aspects, implications and consequences. Less is always more. We’re totally conscious that boredom is the main enemy of music, so we’ll never play post progressive technical blah blah nonsense.

Do you have to be in a particular zone or headspace to make music together? Is it ever too depressing, challenging or tiring to get together and play this kind of music?

How does Legion Of Andromeda’s music reflect you as individuals? What part of you does making music like this satisfy?

Speaking of myself I always been and still am extremely pissed off, nervous and intolerant toward people, human behavior, the superficial way mankind communicates. Even lot of people into the music scene tend to be scum, following trends and acting like idiots. I’m constantly driven by hate so LOA is the primal outburst of all this rage and anger. Same for -M-: suffice to say that if he didn’t work this much, hate his colleagues this much and continue to be stressed this much he would not be able to write music so violent. He deeply hates his working environment but doesn’t want to quit because his riffs would suffer for it.

Tell me about that cymbal crash: it almost seems like a beacon running through the record. It puts my nerves on edge, and yet the regularity is almost comforting…

It’s LOA’s pulsating core, it’s paramount, it’s quintessential. No LOA without that. Saying you find it unnerving but comforting means you already saw through and accepted LOA. You let it drill your brain.

How do you want listeners and audiences to react or respond to your music? Would you feel more rewarded if they stayed staring until their ears bled or if they ran from the room screaming?

Trend-following scumbags and narrow-minded idiots will run away and that’s totally fine with us as we don’t need the consent of such garbage. Likewise, we’ll be more than happy to mentally sodomize the people who have the guts to stay.

Who do you view as your peers and influences? I hear elements of Swans, Corrupted and Godflesh, but you definitely don’t sound ‘like’ any one band per se…

Well, thanks for saying that, as sounding like no one is a necessity for us. We got totally sick of the nth shitty doom band or the usual clones. Fuck off that weak shit. Of course, Swans, Godflesh, VON, Big Black and Suicide influenced LOA in one way or another but, again, they’re more subtle, more unconscious than real, as LOA is primary a process of deconstruction and ultimately the reflection of our own personas.

How does Legion Of Andromeda fit in with Tokyo’s music scene? While there is often a focus on the hardcore bands coming out of Japan and there are several ‘bigger’ artists that everyone knows about (Boredoms, Zeni Geva, Merzbow, Acid Mothers Temple…) it would be interesting to know what is happening beyond these spheres.

We’re still novel in the Tokyo underground so I don’t have an exact opinion. However I think LOA is a sort of transversal force so it can fit well both on noise and metal scenes.

What does the future hold for Legion Of Andromeda? Will you be touring the LP, and what can we expect next?

We have a couple of very exciting projects on the horizon but they’re still in early stages, so no need to disclose them now. Second, we’d like to tour overseas to promote ‘Iron Scorn’ – nothing confirmed yet, but we’re working on it.

Is there anything you would like to add or say that you haven’t covered already?

LIVE TO HATE. COSMO HAMMER MASTER OF THE UNIVERSE.